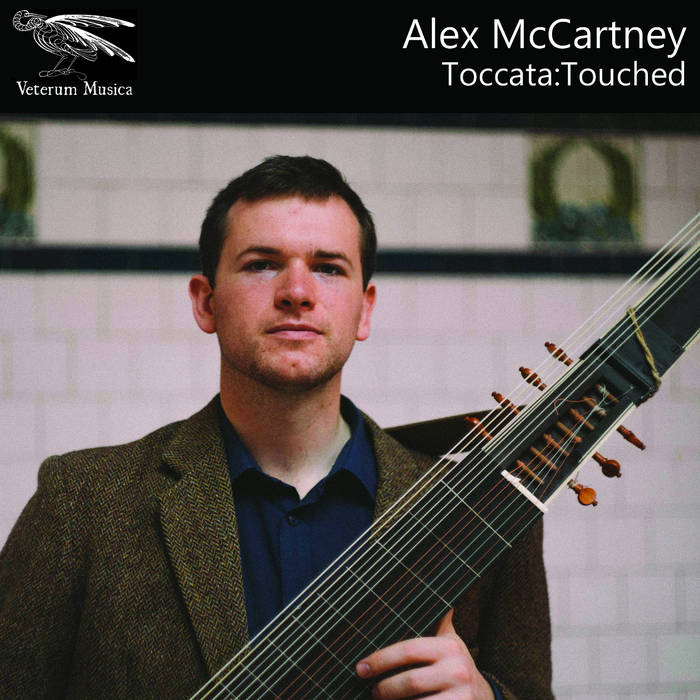 Ben Koehler This uncommon instrument is handled exceptionally well by Alex McCartney in this album. As a result, he has created a depth of sound that I think is equally uncommon in solo instrumental pieces! Favorite track: Gagliarda, Book 3, G. G. Kapsberger.

tomemlyn Alex McCartney is one of the highly talented of the new generation. My advice is listen to anything he's done!

Reviews:
'...McCartney interprets with elegance and sensitivity. [He] adapts well to the varying characters of the pieces. The quality of the sound must be atributed to McCartney's excellent playing and recording skills.' Fiona Thistle, LSA

'Kapsberger has found a worthy and accomplished ambassador in Glasgow-based lutenist and luthier Alex McCartney... McCartney establishes his technical credentials with an impressive range of intricate flourishes... Equally noteworthy is the vivid sound capture achieved in Glasgow Cathedral [...] total clarity is achieved and maintained... The prevailing mood is one of concise and upbeat exploration of musical ideas.' Paul Fowles, UK Lute News

'A sublime recital of works by G G Kapsberger (c1580 – 1651). Although complex music this is a very relaxing listening experience as Alex McCartney breathes life into this ancient and mostly forgotten music. A lovely production.' Lark Reviews

'This recording is clearly something of a labour of love... Alex McCartney plays with musical conviction, taking even the tiniest little musical morsel seriously.' Andrew Benson-Wilson, Early Music Reviews

'With the rich, deep tones of the theorbo, and some rippling and cascading runs, deftly articulated here by McCartney, this is a delightful programme. Another enjoyable disc – notably recorded and produced by McCartney himself on his on micro record label.' Nick Boston, Classical Notes

Giovanni Girolamo Kapsberger's (c.1580-1651) works for theorbo are virtuosic, exploratory and peculiar: his baffling and brilliant use of rhythm (at a time when most other virtuoso players were pounding the semi-quavers) stewed with his surprisingly-odd chromatic harmony lends his music an obscure and surprising quality. As a result of his unconventional style his direct musical influences are ephemeral. He spent most of his life working in the same household (Cardinal Barberini's: the nephew of Pope Urban VIII) in Rome as Girolamo Frescobaldi; inevitably close during their presumed co-development of the toccata form: – 'toccata' translates as 'touched' – but otherwise much of K's life and music eludes us. By the 1610s the toccata was a fantasy form born out of sixteenth-century preambulatory forms such as the prelude, ricercar and 'tastar de corde' (to tune the strings): juxtaposed sections of blindingly florid passages and fugal polyphony are abruptly joined in a theatrical improvisatory style.
This album focuses primarily on Kapsberger's preludes and toccatas with only a few dance movements (gagliarda, corrente etc.) thrown in for their notable and enjoyable peculiarities. All the pieces recorded are from Kapsberger's 3rd (1626) and 4th (1640) books for theorbo. Kapsberger's 2nd book of theorbo (chitarrone) music still remains to be found.

'[Kapsberger] with his superb genius and other scientific skills in which he was expert, successfully penetrated the secrets of music.'
Anathasius Kircher: Musurgia Universalis (1650)

Alex McCartney has a busy performing schedule which takes him to concert halls across the world.
Alex is a resident artist with his own record label Veterum Musica. In 2015 he released his debut solo album Mèsangeau's Experiments to critical acclaim: 'McCartney’s interpretation of this reflective music is stylish and sublime.' [LSA]. His second solo album Elizabeth's Lutes (released in June 2016) was similarly well received: 'This is a highly enjoyable disc, warmly recorded and expertly performed throughout.'
Nick Boston, Classical Notes.
Alex performs as a soloist with artists such as Iestyn Davies, Ensemble Libro Primo (Sabine Stoffer), Ensemble Marsyas (Peter Whelan), The Gabrieli Consort, Cupid and Death, and Poeticall Musicke.
As a continuo player, Alex's playing has been described as 'sinewy and sensuous, ornaments rarely exaggerated' [Observer]: he holds principal positions in La Nuova Musica and Poeticall Musicke and is delighted to perform regularly with all the UK-based baroque orchestras.
Alex is a life member of The Royal Society of Musicians.
Alex teaches the lute at the University of Aberdeen and in Glasgow.
In his spare time he enjoys making lutes.

Theorbo made by Paolo Busato after Vendelino Eberle (Padova 1611)
Recorded in the Glasgow Cathedral, October 2016
Recorded and produced by Alex McCartney
www.alexmccartney.co.uk
www.veterummusica.com